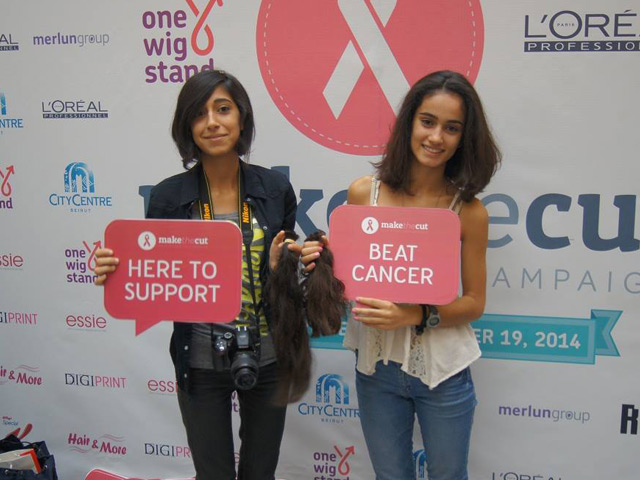 With the aim of raising breast cancer awareness, local NGO “One Wig Stand” in collaboration with “L’Oréal Professionnel” organized a special hair donation campaign titled “Make the Cut” at City Centre Beirut on Sunday the 19th of October, 2014. The event aims to provide free hairstyles in exchange for hair donations of 20 centimeters in support of women diagnosed with breast cancer.

The event brought together some of the most important L’Oréal hair experts from 12 different Hair Salons, among them  Pace e Luce, Juliano Asmar, Jackyo, Bare’, and Georges Nakhle, who succeeded in attracting large crowds of people willing to donate their hair. In only one day at City Centre Beirut, the NGO was able to collect 530 donations, a figure that would have normally taken them an entire year to achieve. Amidst a joyful and exciting atmosphere at City Centre Beirut, women of all ages headed to the designated pink platform in order to donate their hair in support of women who are not only diagnosed with breast cancer, but who are also not very self-confident.

Sleiman Mallat, Senior Mall Manager at City Centre Beirut said: “At City Centre Beirut, we never miss an opportunity to show and confirm our support of women’s issues, as it is an integral part of our society. It is for this reason we decided to host such an event, and hope to make it a yearly event in the future, one that raises awareness about the importance of getting a mammogram and provides moral support to all women.”

He added: “Hosting such an even at City Centre Beirut stems from Majid Al Futtaim’s deep-rooted values and its belief in giving back to the community. With the aim of promoting a culture that lends a helping hand, Majid Al Futtaim hopes to create a better environment for generations to come.”

City Centre Beirut always looks for ways to reach out to its community, creating great moments for everyone every day.