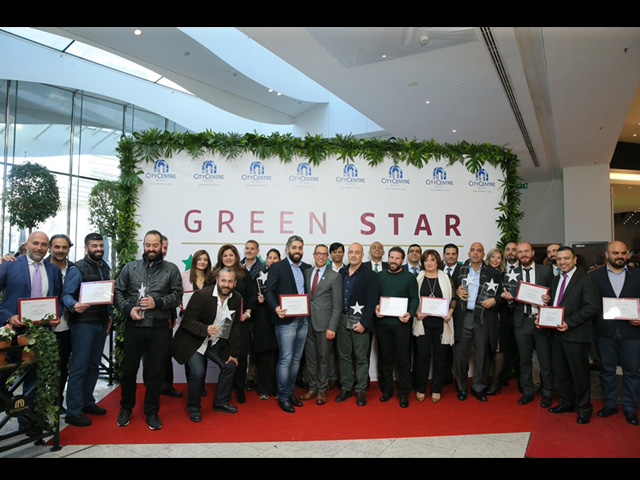 Tenants at the Centre were awarded for completing the Green Star rating within Majid Al Futtaim rating system.

City Centre Beirut launched the first edition of the Green Star Award Ceremony to honor and award the tenants that adhere to a series of sustainability features within the green rating system set by Majid Al Futtaim group. The tenants with 3 and 5 stars were recognized and awarded during an event held in the presence of former Minister Nabil De Freige, environmental activists, key members of the press, media representatives as well as tenants; Attending from Majid El Futtaim were Mr. Vitor Noreigua Managing director of West Region and Mr. Ibrahim Al Zu’bi, Head of Sustainability.

Minister Nabil De Freige welcomed these environmental initiatives led by the private sector inviting Majid Al Futtaim to continue to have faith and invest in Lebanon. In his turn, Mr. Charles Arbid, President of the Lebanese Franchise Association expressed his gratitude towards City Centre Beirut and towards Minister De Freige’s continuous support for environmental causes and his belief in the vitality of the private sector.

Ibrahim al Zu’bi, Head of sustainability, Majid Al Futtaim – Properties expressed his gratitude: “Sustainability is one of our key objectives. It gives us license to operate as an organization that focuses not only on profitability but also on making positive social impact. We believe that by spreading the green culture throughout the region, we are enhancing people’s lives and setting an inspiring example for everyone to follow”.

“This ceremony is a milestone for City Centre Beirut and further reinforces the sustainability culture of Majid Al Futtaim. We are honored by the continuous effort of our tenants and their commitment in complying with the green star rating,” commented Sleiman Mallat, Senior mall manager - City Centre Beirut.

City Centre Beirut was built with an eco-friendly foundation and approach, respecting the environment and everyone in it. The centre complies with the necessary qualifications to help reduce pollution, increase the effectiveness of energy sources such as electricity and water and encourage recycling processes. And the Green Star Award Ceremony is an opportunity for City Centre Beirut to reward the tenants while shedding the light on the importance given to sustainability. The 31 tenants who were awarded greatly represent what the Majid Al Futtaim group stands for and sets an example for the rest of the tenants for the years to come.

City Centre Beirut is the only mall in Lebanon to acquire the LEED gold certificate and continues to strive to deliver great moments for everyone every day within an eco-friendly environment.