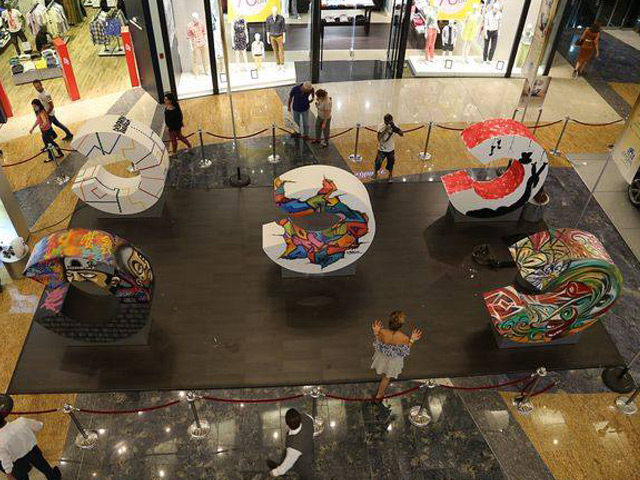 City Centre Beirut Encourages Art and with a Big Heart

City Centre Beirut offers a platform for artists to showcase their creativity and for a good cause!

City Centre Beirut, the one stop destination for fashion and entertainment, is well aware of how art can be a powerful instrument of social change. In order to promote local talent and work for the betterment of society, City Centre Beirut invited its customers, media, and VIPs to visit the Mall on Saturday August 9th, 2014 and witness 5 artists work on various forms of art – graffiti, fashion illustration, street art, as well as lego – and create beautiful pieces out of the Mall’s trademark “C”.

From noon until 8 in the evening, City Centre Beirut’s “C” was the center of attention as the five Lebanese artists; Hady Beydoun, Rami Mouallem, Alfred Badr, Sandra Bakhamian, and Dispatch Beirut fervently worked to create great works of art. Five prominent wooden “C” structures were placed at the Mall’s Centre Galleria for each artist to work on. All invitees had the opportunity to watch this exclusive art show where creativity, free-spirit, and enjoyment filled the atmosphere.

Sleiman Mallat, Senior Mall Manager at City Centre Beirut said: "By launching the Art of Cs, City Centre Beirut aims to open people’s eyes to art, while also opening their hearts to others in their community. We are very excited to have received Lebanese artists and to have given them the opportunity to showcase their creativity in front of a wide audience.”

He continued, “We are more than happy to launch such an initiative that serves the community we care so much about, and hope this exceptional event will inspire people from all ages to create beauty, joy, and gratification in their lives every day.”

The five exceptional Lebanese artists brought forth their talents and gave their all in order to support five different NGOs; Dispatch Beirut for Kunhadi, Sandra Bakhamian for Tamanna, Alfred Badr for MARCH, Rami Mouallem for Donner Sang Compter, and Hady Beydoun for Children’s Cancer Center of Lebanon. The artists were thrilled to take part in this initiative which gave them an opportunity to demonstrate their different and unique talents and simultaneously help out their local community.

The event attracted crowds of people who watched in awe how each of the artists passionately transformed their C’s for the NGO of their choice. At the mall’s Centre Galleria, passerby took pictures and videos of the action-packed event which further affirmed City Centre Beirut’s support of local artists and its commitment to its community.

Customers, fans and art enthusiasts will have the chance to vote for their preferred work of art on social media platforms. As City Centre Beirut reaches out to the community in any way it can, each NGO will receive $1,000 regardless of which artist receives the most likes. However, to instill a healthy competitive spirit, an additional $2,000 will be given to the winning NGO, which will be announced in December 2014. By voting for their favorite piece of art, every voter will ultimately be helping an NGO, and therefore the community.

Such initiatives that bring communities and people closer together are not a first for City Centre Beirut, and it makes sure to never miss an opportunity to set such an example.