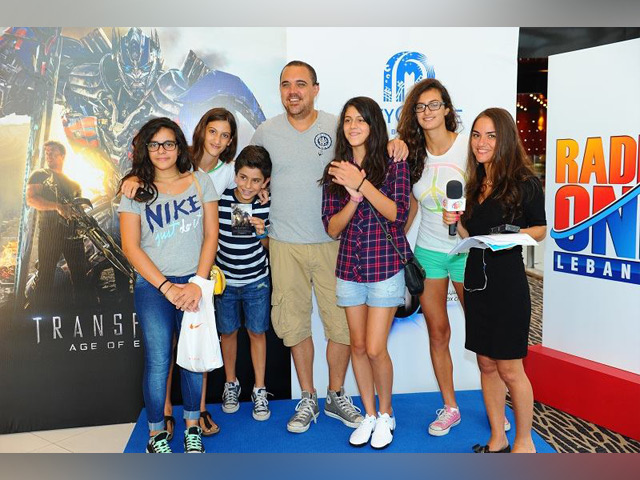 City Centre Beirut Gets the Summer Rolling with the “Transformers 4: Age of Extinction” Avant Premiere

With exclusive Premieres, Promotions and Prizes, City Centre Beirut guarantees a summer like no other!

City Centre Beirut, a one stop attraction for shopping, entertainment and fun, knows how to make every moment count for all of its customers. On July 22nd 2014, City Centre Beirut invited around 500 guests that included key journalists, media members, bloggers and VIPs  to the pre-screening of the highly anticipated movie “Transformers 4: Age of Extinction” at the mall’s VOX Cinemas, Lebanon’s largest movie theater.

The film opens in theatres nationally on July 24th 2014, but City Centre Beirut wanted to give its lucky guests the opportunity to enjoy the exclusive screening before anyone else at VOX Cinemas. Guests were looking forward to enjoy the movie franchise, starring Mark Walberg, which was announced to be one of the biggest movie hits of 2014 in its opening weekend.

Radio One’s Clint Maximus held a roadshow at the mall before the start of the movie, entertaining guests and engaging them in competitions and activities that enabled them to win prizes, including tickets to the Avant Premiere and free meals from Atilla Mongolian Grill, Pizzaro, FatBurger, The Steak and Cheese Factory, and Food Style. Guests are sure to enjoy dining at The City Centre Beirut International Food Court which serves flavors from across the globe, be it a quick snack or a gourmet feast.

Among the invitees were three of City Centre Beirut’s Summer Promotion Campaign winners. Between July and August 2014, any customer who spent $200 at any of City Centre Beirut’s stores on the same day, immediately entered the draw to win 1 of 8 KTM motorbikes or an Audi A5 Cabriolet. In line with its belief in making unique moments for everyone every day, City Centre Beirut had Mrs. Manale Ibrahim, Mrs. Amal Kojok and Mr. Rachid Abou Jaoude come to the mall thinking they were only there to watch the Avant Premiere, unaware they had each won a KTM motorbike.

As City Centre Beirut loves the element of surprise, it had Clint Maximus call the winners and announce the surprise live on air. The winners were beyond happy, and thanked City Centre Beirut for constantly exceeding all of its customers’ expectations. Furthermore, and to surprise every attendee, City Centre Beirut left prizes and cash gift cards worth $500, $750 and $1,000 under the seats of guests in addition to 50 free meals from the different outlets of the food court.

Be it Avant Premieres, summer promotions, or surprises, City Centre Beirut always makes sure to create great moments and satisfy the needs of all of its customers.