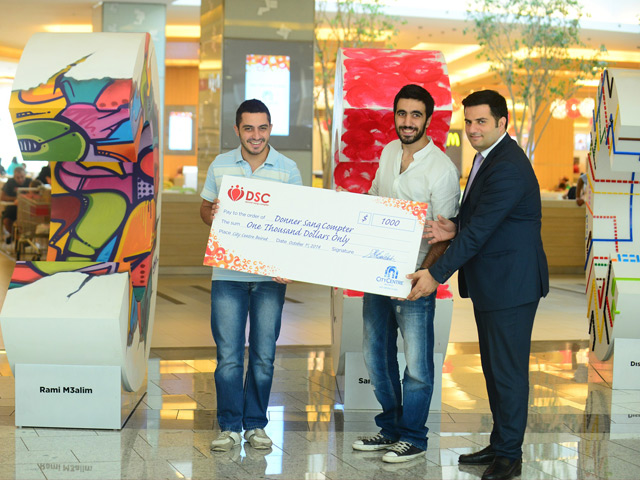 After having the opportunity to be a part of the “Art of C” social initiative, five local NGOs operating in different fields, gathered at the Mall to receive grants from City Centre Beirut, the one stop destination for fashion and entertainment.

After having the opportunity to be a part of the “Art of C” social initiative, five local NGOs operating in different fields, gathered at the Mall to receive grants from City Centre Beirut, the one stop destination for fashion and entertainment. The groundbreaking initiative that combined art and the community entailed the selection of five Lebanese artists who work on various forms of art, to create beautiful pieces out of the Mall’s trademark “C”.

The five exceptional Lebanese artists brought forth their talents and gave their all in order to support five different NGOs; Dispatch Beirut for Kunhadi, Sandra Bakhamian for Tamanna, Alfred Badr for MARCH, Rami Mouallem for Donner Sang Compter, and Hady Beydoun for Children’s Cancer Center of Lebanon.

The artists and NGOs gathered at the Mall and headed to where the C structures were placed, giving everyone the opportunity to see all of the works of arts displayed, before receiving their $1,000 donation.  The exhibited C structures also gave visitors the chance to see and vote for their favorite piece of art on the Facebook voting application, as an additional $2,000 was pronounced  to be given to the NGO with the most votes.

The 31st of October marked the ending of the voting application, and Rami Mouallem was announced to be the winner. $2,000 was given to the NGO of his choice, Donner Sang Compter.

Sleiman Mallat, Senior Mall Manager at City Centre Beirut said: “The most beautiful aspect of this initiative is its success in reaching out to the community through art. The five artists with their diverse talents have proven their willingness to serve their community, in addition to the voters who ultimately helped their community by voting.” He continued: “This initiative that has joined art, beauty and creativity for a good cause, will definitely not be the last for City Centre Beirut, as we always look forward to creating great moments for everyone every day.”